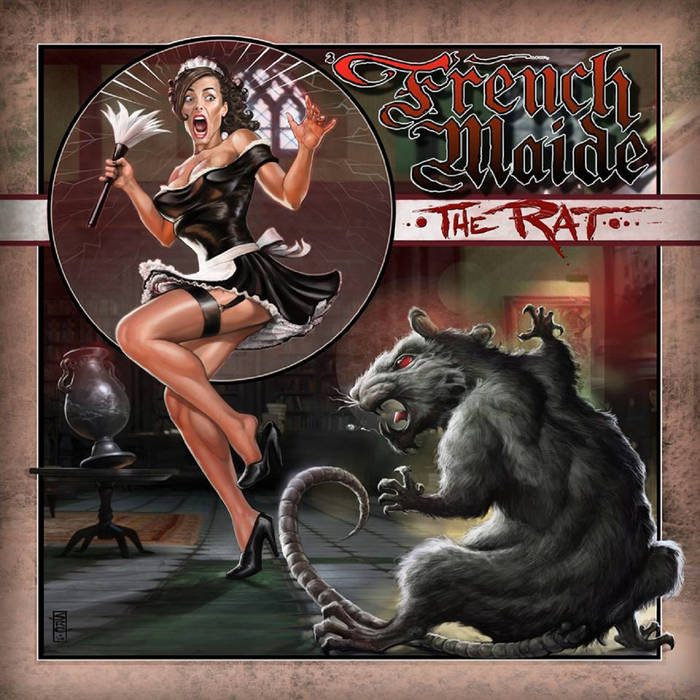 Christian Mumford i dont get french Maids, i get neighbors from India and communal cleaning crew from Drammen, or asker or somewhere. hired by FAT team, i buy cleaning fluids, got vacuum cleaner ready, theyre like east europe or turkey or african maides. very good at cleaning! just like the Pentagon or military! Favorite track: The Rat.

The band would start out as a radio rock cover band, quickly gaining a local following in the in their area. Eventually, they began to write their own material and slowly incorporate these songs into their sets. In 1991 FRENCH MAIDE would self-release an EP cassette titled ‘Maide in America’, their first recorded material. The 6-songs would be a blistering hard rock with a hint of sleaze in stylings fashionable to the time; think Dirty Looks, Sea Hags or Circus of Power.

Shortly following the release of ‘Maide in America’, Wheeler would be replaced by Todd Szoszorek.

As their following in Erie continued to grow the band decided they were in need of a frontman. They soon asked Tony Mankoski, who had been surfacing in the local scene, after seeing him perform with his band while opening for FRENCH MAIDE one night.

With the two new faces and fresh input, the band began to develop more of a metallic sound as they headed into a more melodic heavy metal direction similar to Leatherwolf, Riot or Fifth Angel. With this evolution, the local crowds grew larger and the band extended their playing area to Pittsburgh, Cleveland and Buffalo opening for national acts such as Quiet Riot, Peter Criss (KISS), Kix, Widowmaker (Dee Snyder), Great White, and their local brothers Dirty Looks.

In 1994 FRENCH MAIDE released their full length ‘THE RAT’ on their own label Small Handgun Records. After its release, the band struggled to keep the same lineup. However, Moffatt, Mankoski, Szoszorek tried to keep the band alive throughout the following years, around 2012/13 the three finally decided to part ways and lay the Maide to rest.