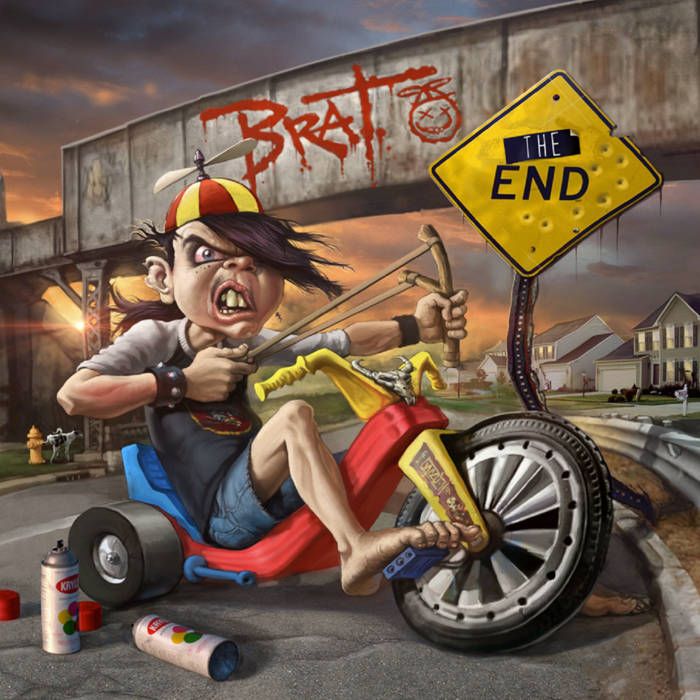 In early 1986, the band “The End” from Philadelphia, Pennsylvania was on hiatus. That band had worked with the Paragon Cable Network in New York City who again approached the band with an offer of additional appearances and video shoots on their show “Music Beat”. When the band regrouped for these appearances in the fall of 1986, several band members were replaced. Curt Ritchie (guitar), Bazooka Joe Solina (drums) and Jean Pierre Reimer (guitar) decided to revamp the sound a bit and brought in Brian Paine (vocals) and brought back former drummer Roberto Lombardi (bass). Lombardi had ditched the drums and had been a fulltime bassist for two years. It was discussed at this time that a name change to “Brat” might be warranted as the new members gave the band a totally different sound.

The band then entered the studio “Fresh Tracks” in Philadelphia to record a fresh batch of new music that would be the soundtrack for their early 1987 New York television appearances at Paragon. Basic tracks were recorded as a band, not individually by a member and gave the songs a live feel. Lead guitars and vocals followed and within a month they were putting the final touches on the tracks. The first completed songs, “Love &amp; War” and “Back On Top”, were previewed and were already gaining some regional radio play.

The band then began showcasing for major labels, most notably MCA and Capitol records, who both wanted to hear more material. So, again the band began writing songs to appease the label's interest. Seven more songs were written and rehearsals for the new recording began when tensions arose between Reimer and Solina which led to Solina exiting the band and joining “Rough Dymond”. The band briefly recruited drummer Jim “Feek” Ferraioli (formerly of “White Foxx”), but sadly Ferraioli became ill with cancer and couldn’t remain in
the band.

When sessions for the new material finally began in the summer of 1988, they were completed with veteran drummer Jimmy Drnec (“Cinderella”, “Tangier”, “Network”) filling in. Basic tracks were again completed with the entire band playing, but the band's relationship with Reimer totally broke down as the rest of the band were never happy with the departure of
Solina. So, Ritchie re-recorded all of Reimer’s guitar parts after Reimer was let go.

At this point in 1988, the band completed the new recordings, drafted in drummer Mark Kaminski and changed the name of the band officially to “BRAT”. The name recognition was gone with the change and the label interest dried up. Continuing on, “Brat” began gigging in the fall of 1988 and also wrote and rehearsed several new songs for a new album. Eventually, though, Ritchie and Paine joined the popular “Dead End Kids”, while Lombardi joined “April Fool”. Lombardi later formed “The Rage”.

Tracks 6 & 7 were originally recorded in 1985 at "Galaxy" studios in Somerdale, NJ & produced by Robert Leese. Additional recording and remix in 1988 by Larry Spivack and produced by Roberto Lombardi at “Fresh Tracks” in Philadelphia.