Symposium of a Troubled Mind & Beyond 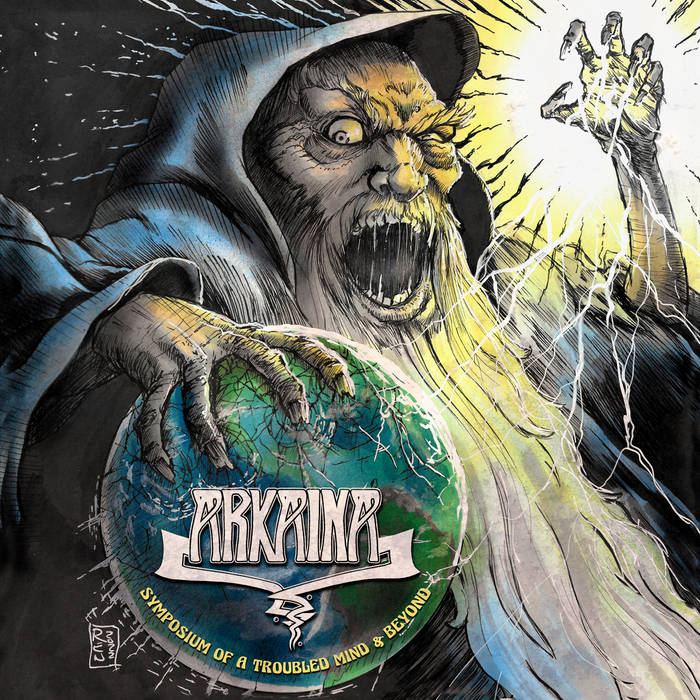 ARKAINA began to form in 1991 in Bedford, Massachusetts when vocalist Sean Duffen and guitarist Tim D’Angostino meet each other after responding to an ad. Shortly after their meeting, the two would recruit a second guitarist named Marshall Shanklin. Now only a rhythm section would be needed so to bring it all together. Drummer James Iannalfo would be brought on board and shortly after bassist Evan Desmarais to add that low end.

ARKAINA was complete; with the impressive multi-octave prowess of vocalist Duffen which was both melodic and powerful, the solidly complimenting dual guitar stylings of D’Agostino and Shanklin, plus powerful rhythm section mechanics from bassist Iannalfo and drummer Desmarais.
Over the next year, the band would focus all their efforts on writing and crafting the compositions that would become their first record effort ‘Symposium of a Troubled Mind’. Meanwhile honing their sound and technical skills.

In 1993 ARKAINA would record their 5-song demo titled ‘Symposium of a Troubled Mind’. The effort would be an offering of challenging cerebral progressive power thrash metal. Unfortunately, the timing for such heavy metal was less than ideal. Death metal held strong in the underground in the early 90s, even seeing a brief peek into the more mainstream, but at large heavy metal in all its forms was rather taboo in the early 1990s. This would affect many metal acts in the US and ARKAINA was no exception. The band struggled as they began to play out and shop their recent release. A reprieve would come when the band would meet a fan a fairly well-connected person in the underground metal scene named Matt Coe. Coe would help the band begin to get more attention by helping them get some distribution for their recent release as well as interviews and reviews in various fanzines both domestic and abroad.
After a short east coast tour, ARKAINA would face more adversity when Iannalfo and then Shanklin would leave the band. This would cause a brief setback with the band however Duffen, D’Angostino and Desmarais were not ready to call it quits yet. The band would then find drummer Mike Pastore and guitarist Eric D’Melia. With the additions of Pastor and D’Melia ARKAINA would waste no time starting over and repeating the process by writing 4-songs and taking them into a studio. The sessions would become the ‘Beyond’ demo. Sadly the band would encounter the same obstacles they had after the previously release-it was 1995 and heavy metal was still out of fashion. This realization would lead to the band slowly starting to fall apart starting as members would begin to leave the band. Attempts would be made to bring in recruits, and four more tracks would even go into production, but inevitably nothing would hold and ARKAINA would eventually call it a day.

ARKAINA would only have a short time when they went up against the adversity of passing treads. They were certainly not the only band to suffer this fate. However, they were one of the few that produced and left behind some quality heavy metal in their wake. The material from ARKAINA rises to the top of the heap of underground US Metal and begs the question “what could have been?”