Struggle with Society​.​.​.​Who will Win? 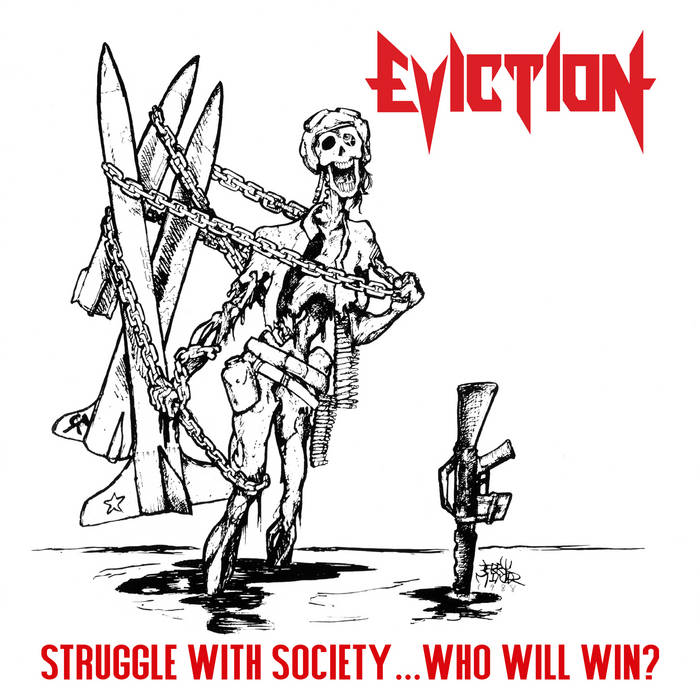 Pittsburgh’s EVICTION was formed in late 1986 with, by guitarist Rob Tabachka and drummer Ron Reidell. Writing all original material, influenced both by punk/hardcore and metal to make their own finely blended crossover thrash. The two would then recruit bassist Todd Porter, but would soon find another bassist named George Grant when Porter would take over solely vocal duties. Grant would not last long and the band would bring in another bassist named Bill Turny. EVICTION also added a second guitarist, Wes Harris, to fill out the band’s sound.
With this line-up, the band would enter Automation Studio to record their first demo. called “Struggle with Society” that featured 8-songs. The demo quickly spread throughout the Pittsburg underground gaining quite a buzz and landing the bands many gigs with both locals and national touring acts coming through Steel City.

The band would once again find themselves with bass player issues but after a couple of temporary fill-ins, they would bring in ex-Dream Death bassist Ted Williams. With this line-up, the band returned to Automation Studio to record a second demo titled “Who Will Win?”. The demo would be met with critical success in underground magazines and publications, leading to more great gigs and a small east coast tour with Solitude to support “Who will Win?”.

The band then received good news. Death Records, a subsidiary of Metal Blade, wanted to sign the band. This lead to their 1990 debut record “The World is Hours Away” engineered by Dean J. Becker and produced by Frank Soriano. The record sold over 15,000 copies worldwide. A video for the song “American Way” was produced. But not all was going well. An issue with the label and internal frustrations in the band lead to Porter leaving. Finding this out, Metal Blade dropped the band.
The band would try to continue on and found a new frontman but this would not last long.

In 1992 the band reformed, with Porter back on vocals, Ron Volpe (Half Life) on drums, and guitarist Joe Stevens. Volpe wasn’t working out in the band and was replaced by Andy Taravella on drums. In April of 1993, they recorded their third demo “Think Tank”, featuring 6 songs produced by Bristan. The demo did well, but it was too little too late, Thrash had fallen behind in popularity due to the Grunge explosion. Unfortunately, the end was near. In 1994 EVICTION would play their last show together.

All music by Rob Tabachka