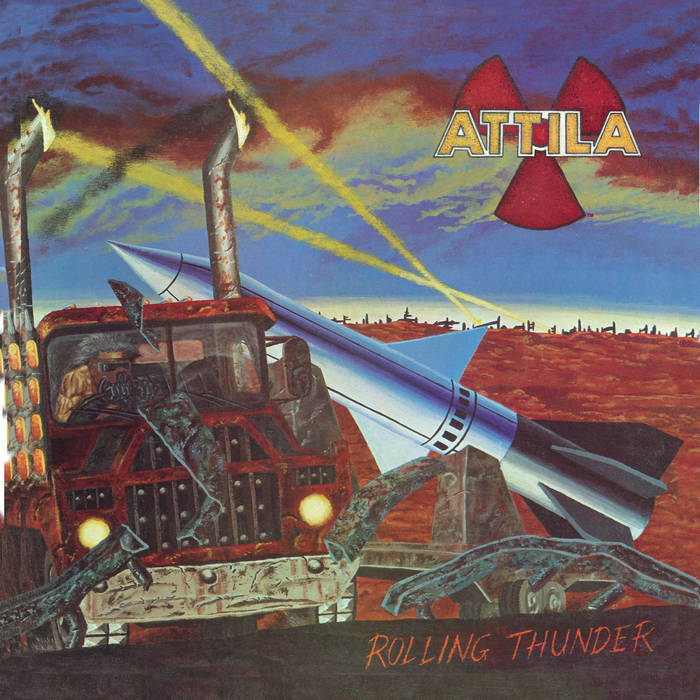 metal29 Had to purchase this one when I found out it had been officially reissued and remastered by Heaven and Hell Records. Have to get more of their current/back catalog in the future before it goes out of print. Great "post apocalyptic/Mad Max" themed metal. Riffs and vocals augment themselves well. My album of the year for 2019 even though reissued over a year ago! Favorite track: Thermonuclear Warrior.

Héctor Hurtado Grooscors Attila is one of those hidden gems from the 80's underground metal scene. Heaven and Hell Records is doing a helluva job rescuing tons of forgotten bands from those days. Favorite track: March of Kings.

ATTILA formed in New York in late 1983 by guitarist John DeLeon. The band would go through several personnel changes before forming the perfect power trio with drummer A.T Soldier and bassist/vocalist Vincent Paul Manfredi in the ranks by the summer of ’84.

By this time interest was being expressed by several independent record labels. It was an energized performance by ATTILA in a battle of the bands' competition that clinched them a deal with the newly formed Shattered Records.

In 1986 ATTILA’s only full-length ‘Rolling Thunder’, produced by Carl Canedy (The Rods) was released. A 9-song, including a cover of Alice Cooper’s ‘School’s Out’, a solid slab of grade A U.S. heavy metal that would go on to sell over 10,000 copies worldwide.

Mysteriously ATTILA would disappear and be lost in the ruins of the next decade to come. But with the dawning of the internet age and the quickly growing collector’s scene digging up long lost heavy metal gems ATTILA would be re-discovered and once again in demand.

Additional keyboards on ‘March of Kings’ by Vincent Cinquemani

All songs written by J. De León except "Tryst" by De León/Paul, "Urban Commandos" by De León/Bachi and "School's Out" by Cooper, Dunaway, Smith, Buxton, Bruce