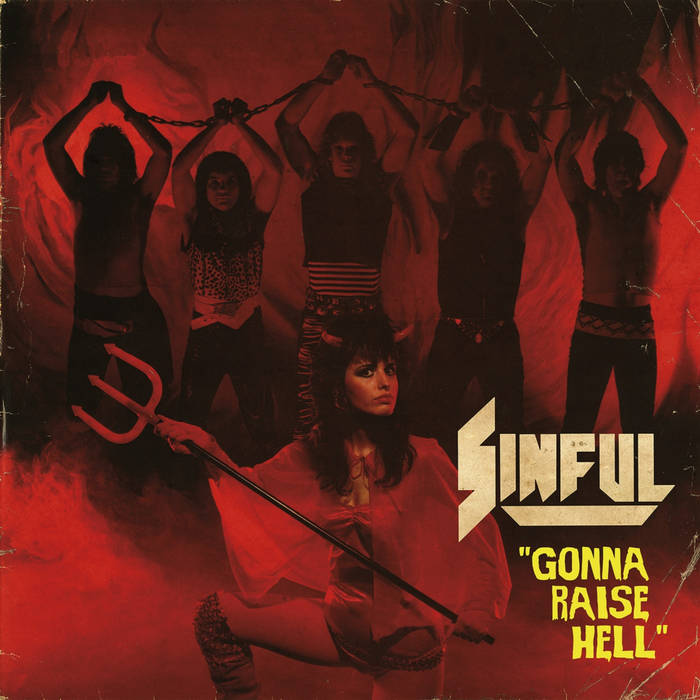 HEAVEN AND HELL RECORDS will soon release SINFUL’s 1985 EP “Gonna Raise Hell’ for the first time officially on CD. This remastered reissue also includes several bonus tracks including; a live in the studio recording, demos and a track amended from the original 1985 release.

SINFUL was conceived in Hell’s Kitchen, NY in the late 1970s by high school friends guitarist Jimmy Ambrose and bassist Al Garay. After several members in and out of the band drummer, Nelson Onofre would be added. Along with the addition of vocalist Marty Karoll, SINFUL started playing the New York club circuit. The band failed to secure any record label interest and broke up. The members began to go into other projects one of which saw Ambrose joining Canadian Muscle rocker THOR. Karoll would quit music entirely.

After Ambrose’s stint with THOR, he would begin to reform SINFUL with Garay and Onofre. They would recruit Portland, Maine vocalist Dana Albert. With the addition of Albert, the group would head into the studio to lay down tracks for their 1984 demo. Around this time Garay would decide to move over to playing just keyboards. This caused the band to have to audition for a new bass player that would lead to Nars Lopez joining the band.

The idea was to combine the heavy metal power and majesty of JUDAS PRIEST with the progressive melody and ethereal harmony of ANGEL, with a touch of glam rock. For all their efforts, if this were not achieved, it certainly showed effort and a band that just might have been a little ahead of their time.

As the demo circulated throughout the local rock scene, eventually going abroad and catching the attention of Metal Forces’ Dave Reynolds and Kelv Hellrazer. Hellrazor would help the band negotiate a deal with the small UK label Shades Records who would release the band’s debut EP “Gonna Raise Hell”. There would be hints of a full-length to follow yet inevitably this would never happen.

“Gonna Raise Hell” would get favourable reviews in European press such as in the pages of KERRANG but back in the states, it failed to reach an audience. This would lead to the eventual disbanding of SINFUL.

SINFUL was one of many, many bands across the rock n roll landscape that became lost to time as popular trends would rapidly change throughout a decade that is often unjustly generalized.