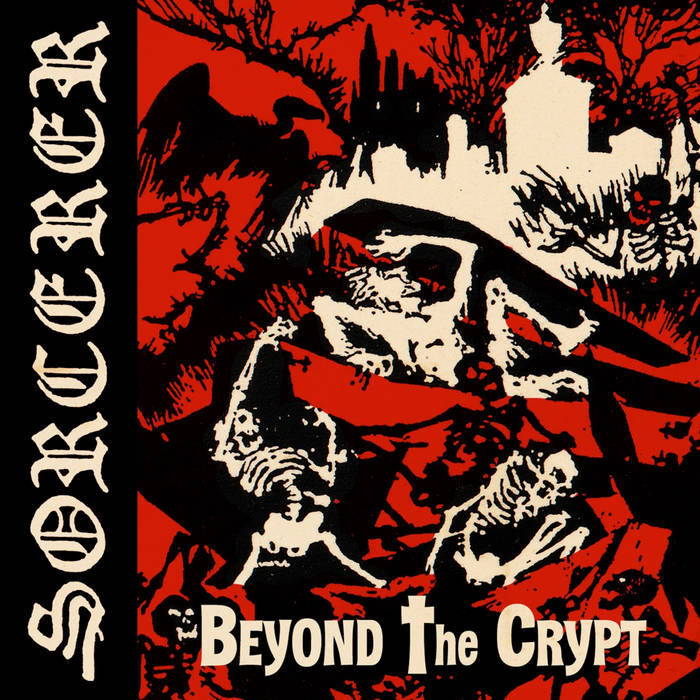 In 1989, three high-school mates in Philadelphia, Pennsylvania would bring together their creative talents to form a progressive psych influenced heavy garage rock band known as SORCERER.
The power-trio of guitarist Sam France, bassist/keyboardist Michael Selcovitz, and drummer Steve Burdziak would avoid popular trends and focus on a more organic and pure sound. By manipulating the guitar to his advantage, France moved from powerful rhythms to blazing, furious, speed-picking leads with swift and precise accuracy. The band’s driving bass and intricate keyboard playing by Selcovitz and the raw and unleashed drumming of Burdziak complemented each other. Together, the three completed a diverse and obscure band.

SORCERER would record and humbly self-released a demo titled ‘Beyond the Crypt’ that would only be distributed locally at live gigs. Although it would not be correctly dated so to be called proto-metal, the 7-song effort would certainly capture that early pre-heavy metal sound and give reminding glimpses of obscure NWOBHM acts now lost to time.

The band would play several shows in Philly and in southern New Jersey over the next few years. They would also record several more demos that would never see the light. Over the short time of the band their sound would rapidly change, never again really capturing what was laid down on the “Beyond the Crypt” demo.

SORCERER was a band born too late. They would come and go quickly, not ever really having a chance to survive. Ahead of a future resurgence, behind a popular trend, they were simply a band at the wrong time.